Since 2012, all proposed state agency rules that impact Ohio businesses undergo an analysis and are subject to review by the CSI office to determine if the regulatory intent of the rule justifies the impact to businesses. The centralized eNotification system enables individuals, businesses and other interested parties to track, review and comment on these rules by creating a regulatory framework that promotes economic development, is transparent and responsive to regulated businesses, makes compliance as easy as possible, and provides predictability for businesses.

Under Taylor’s leadership, the CSI has benefited Advanced Power’s efforts to permit both the Carroll County Energy and the Southfield Projects.

Murphy talked about the economic impact of the Carroll County Energy project, his permitting experience in other states and how much easier it is to navigate the permitting process for Advanced Power’s combined-cycle gas turbine facilities through the Ohio Power Siting Board. The construction of the facility is an $800 million investment and is employing 800 union workers on day and night shifts with100 non-manual workers — the vast majority of these workers commuting an hour and a half or less.

Also discussed was the impact of road and utilities installation on economic development. This regulatory-municipal relationship was evident in the discussion of ODOT’s cooperation in facilitating the installation of a water line in their right of way, as opposed to the community having to buy property to install the water line.

Murphy spoke of Carroll County Energy’s involvement with road improvement with ODOT, the cooperation the project has received from the Village of Carrollton leaders and the assistance from the Carroll County Commissioners and Carrollton Chamber of Commerce. The help Carroll County Energy received from the community, county and State is evidence that each organization is helping with the development of infrastructure, focusing on the common goal of developing business growth as quickly and efficiently as possible.

Jobs were also discussed as they relate to the oil and gas industry, the extension of Route 30 and Malvern’s largest employer, Colfor Manufacturing, which manufacturers GM car and truck products shipped worldwide.

Murphy and Travis both expressed what an honor it was participating in this session with Taylor, who was instrumental in passing Ohio’s 2005 tax reform package that reduced personal income taxes by 21 percent that also eliminated the tangible personal property tax, the corporate franchise tax and the inventory tax imposed on businesses. She was a member of the House Finance, Ways and Means Committee, a member of education committees and was recognized by the United Conservatives of Ohio as a “Watchdog of the Treasury.” The National Federation of Independent Business (NFIB), the nation’s largest small-business group, also named Taylor a “Guardian of Small Business” for her outstanding voting record on behalf of Ohio’s small-business owners.

They anticipate receiving a request for a site tour of Carroll County Energy from Taylor, as she was impressed by the number of combined-cycle gas turbine facilities anticipated to be built in Ohio, including the South Field Energy project. 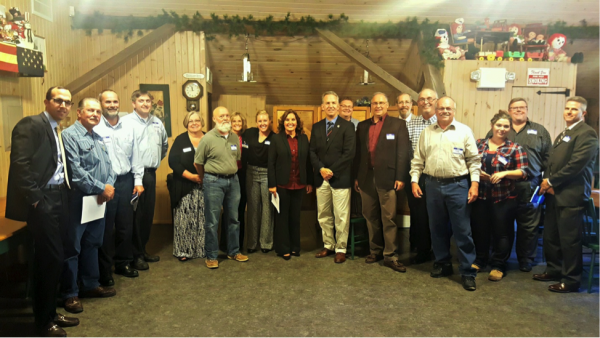 IN THE NEWS
25 December 2019
The Canton Repository
Like a Good Neighbor, Carroll County Energy is There for Carrollton
From construction, operations and maintenance jobs to a bump in the local economy and from a new school building to local charitable support, Carroll County Energy has made a positive impact on the community since day one.

13 March 2019
The Free Press Standard
Take a look inside Carrollton's new school
Construction on the new Carrollton schools is on schedule with an official dedication date set for Aug. 3. That is the latest update given by Carrollton school officials regarding the $42 million plus complex for grades 6-12 being constructed on board-owned property on state Route 332, south of Carrollton. The complex for middle school and high school students in grades 6-12 will officially open in August when classes resume for the 2019-20 school year.